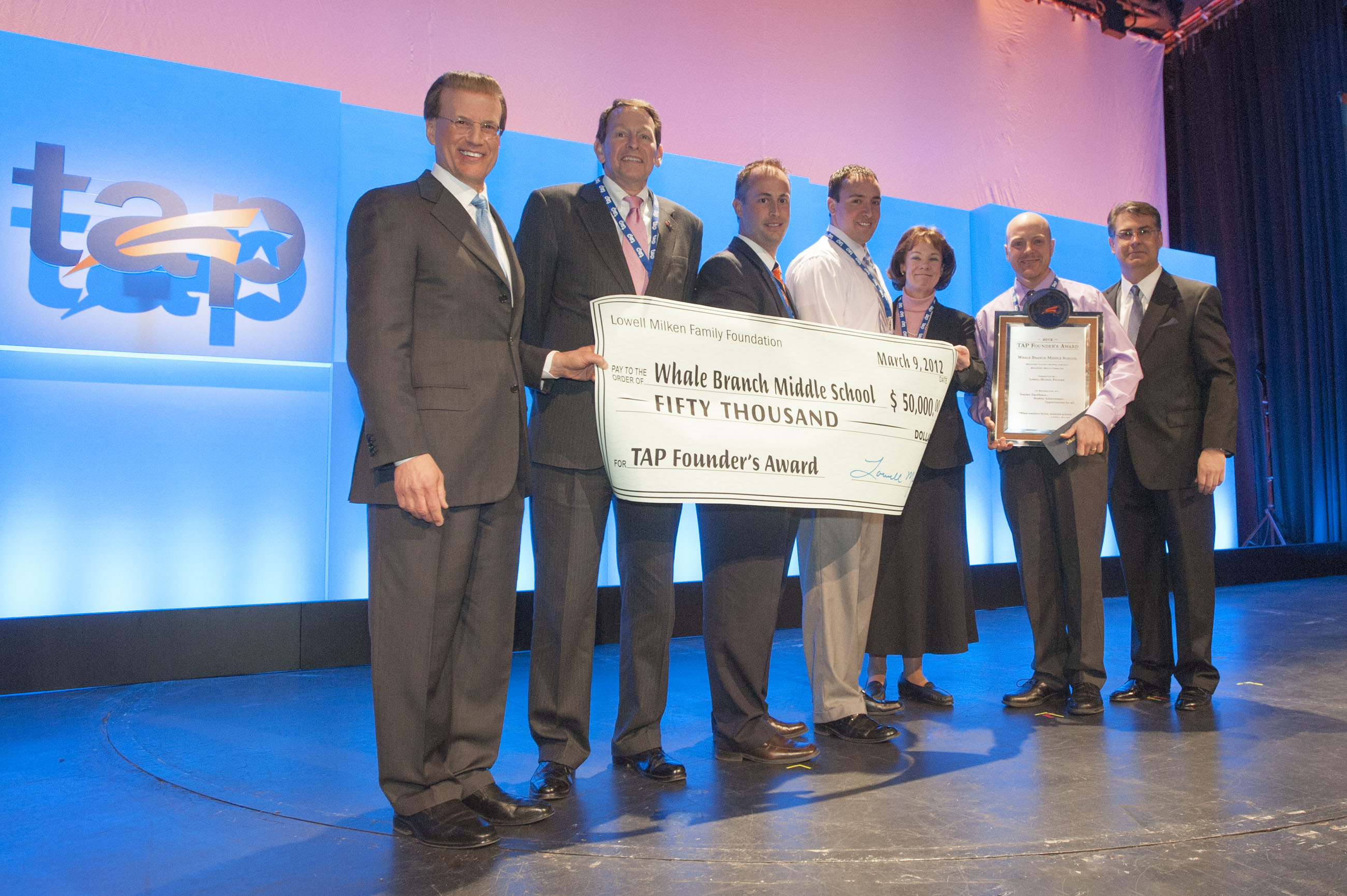 Funded by the Lowell Milken Family Foundation, the TAP Founder's Award is presented annually to one school for distinction in the implementation of TAP's comprehensive system of career advancement, ongoing job-embedded professional development through weekly collaborative "cluster" meetings, rigorous teacher evaluation and accountability, and performance-based compensation. Principal Matthew Hunt and other members of his TAP Leadership Team accepted the award on the school’s behalf.

"With TAP as their guide, educators at Whale Branch Middle School have created a collaborative learning environment where faculty and students continually strive to improve," said Lowell Milken. "I commend Principal Hunt and his leadership team for their commitment to maximizing TAP's potential."

Whale Branch Middle School started TAP implementation in the 2004-2005 school year. During that time, the school was labeled by the state as "at-risk," and according to Beaufort County School District Superintendent Dr. Valerie Truesdale, produced the highest percentage of dropouts in the county. Three years ago, Truesdale selected a new principal, Mona Lise Dickson, to turn Whale Branch Middle around using TAP as its core strategy.

Dickson began leading rigorous implementation of the TAP system, and Principal Hunt has maintained the same level of dedication. Master and mentor teachers facilitate weekly professional development cluster meetings tailored to teacher and student needs. The TAP rubrics guide effective teaching practices, and data is used to drive decisions. Instructional strategies are also "field-tested" with a sampling of students before the methods are fully implemented.

Cluster meetings are complemented by follow-up, classroom observations and pre- and post-conferences with every teacher. They are also supported by TAP Leadership Team meetings, which occur weekly to oversee TAP implementation on a broad scale.

"TAP gives teachers an opportunity to not only reflect on what they're doing, but reflect on how it's affecting the kids they have in their room," said TAP Master Teacher Peter Burvenich.

"Our school has gone from an 'at-risk' absolute rating to an 'average' absolute rating," said Hunt, "which is astronomical in terms of the amount of change, growth, and student achievement that we've seen." In addition, Whale Branch Middle has received a "5" value-added growth score for the past three school years (2008-09, 2009-10, and 2010-11), signifying far above average results compared to similar schools in South Carolina. The school received a "good" growth rating from the state in the 2010-11 school year and for the first time in its history, made AYP for the past two consecutive school years.

"I think the TAP system is probably the best investment of time that an educational system can adopt," said Hunt.

The TAP Founder's Award recipients are selected without their knowledge by the National Institute for Excellence in Teaching—which manages and supports TAP—based on distinction in the following areas: full and proficient implementation of TAP's four elements, achievement according to state or federal measures, and notable recognition as a center and resource of best practices. To be eligible for the TAP Founder's Award, schools must be participating in TAP for at least three years.

The TAP Founder's Award yields benefits that will strengthen the individual school and support its teachers by means of prominent public recognition; opportunities to substantively interact on issues of teacher quality and student learning with leaders from government, business and academia; and stipends for attendance at conferences.

Introduced in 1999 by Lowell Milken, TAP impacts more than 200,000 teachers and 2.5 million students. For more information on TAP or the 12th National TAP Conference at the Hyatt Regency Century Plaza in Los Angeles, visit www.tapsystem.org. You can also follow the TAP system's live updates on Twitter at www.twitter.com/tapsystem.