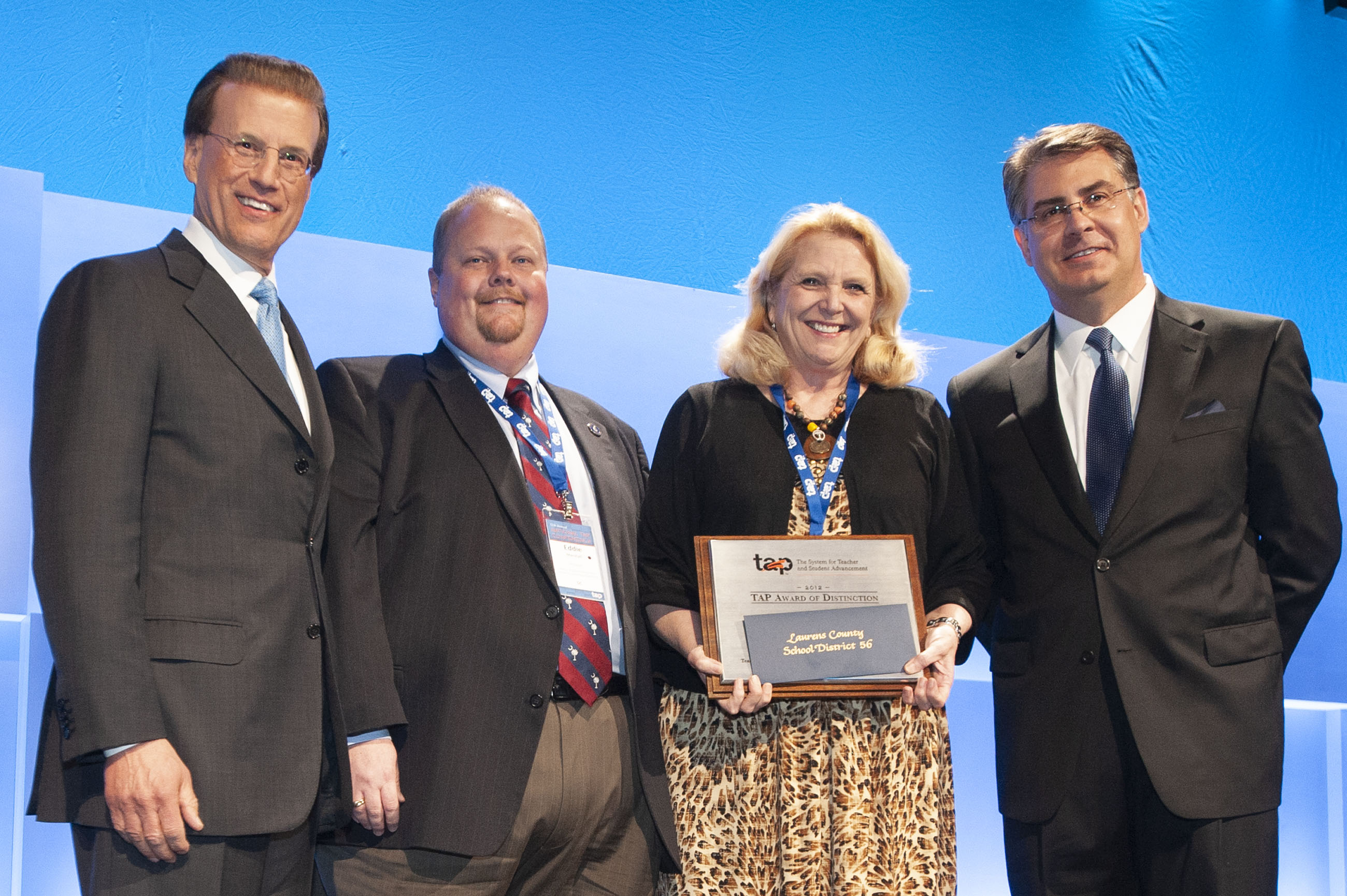 Leaders of the Laurens County School District 56 in South Carolina were surprised with the TAP Award of Distinction, which honors an organization for its dedication and commitment to TAP: The System for Teacher and Student Advancement. The Award was presented before more than a thousand educators and policy leaders attending a Friday luncheon at the 12th National TAP Conference, Building a System of Teacher Leaders. Two principals in the district—Eddie Marshall of Joanna Woodson Elementary School and Melodie Edwards of Eastside Elementary School—accepted the award on the district's behalf.

TAP: The System for Teacher and Student Advancement is a revolutionary education reform that offers teachers opportunities for career advancement, ongoing job-embedded professional growth, educator evaluation and performance-based compensation. The implementation of TAP's comprehensive elements is proven to strengthen teacher effectiveness and student achievement. Laurens County School District is one of the earliest adopters of TAP, starting with Bell Street Middle School as a pilot in 2001. Now the TAP system is implemented districtwide.

"We are proud of our long partnership with Laurens County School District 56," said Dr. Gary Stark, president and CEO of the National Institute for Excellence in Teaching, the non-profit public charity that manages and supports the TAP system and presents the TAP Award of Distinction. "The district and community of educators, administrators and legislators have invested in TAP for over a decade, and have reaped the rewards in terms of educator effectiveness and student achievement."

When Laurens County School District 56 leaders saw TAP's significant impact on teacher retention and student growth at Bell Street Middle School, they knew that the district was ripe for expanding TAP and making it the vehicle for educational improvement. What's more, a comprehensive system to create environments for educators to stay and thrive was just what the district needed.

Now, "TAP is our compass for improving and excelling in our district, one teacher at a time, one student at a time, one school at a time, said Superintendent Dr. David O'Shields, who was principal of Bell Street Middle School when TAP was first implemented.

The TAP system has been in demand in high-need schools partly because it is designed to tailor strategies to the specific needs of teachers and students alike. In Laurens County School District 56, each school has selected master and mentor teachers who, along with the principal and other administrators, form the TAP Leadership Team. This team drives instruction through weekly collaborative professional development and follow-up, classroom observations and pre- and post-conferences with every teacher.

"Through TAP, we're drilling down into the data and looking at things that are making a difference for the school—and most importantly—for that independent child in that classroom," said Marshall of Joanna-Woodson Elementary School.

The district's dedication to TAP regularly serves as a model for other districts and states to emulate. Laurens 56 has hosted state and federal legislators, superintendents and school leadership teams. TAP principals regularly communicate with parents about the connectivity and cohesion TAP creates among content areas and grade levels.

"We have developed a common language based in TAP," said Maureen Tiller, principal of Clinton High School. "This has allowed parents to understand how we hold ourselves accountable and how we are constantly learning and growing to improve student achievement in our district."

The TAP Recognition Awards are funded by the Lowell Milken Family Foundation.

Introduced in 1999, TAP impacts more than 20,000 teachers and 200,000 students. For more information on TAP or the 12th National TAP Conference at the Hyatt Regency Century Plaza in Los Angeles, visit www.tapsystem.org. You can also follow the TAP system's live updates on Twitter at www.twitter.com/tapsystem.