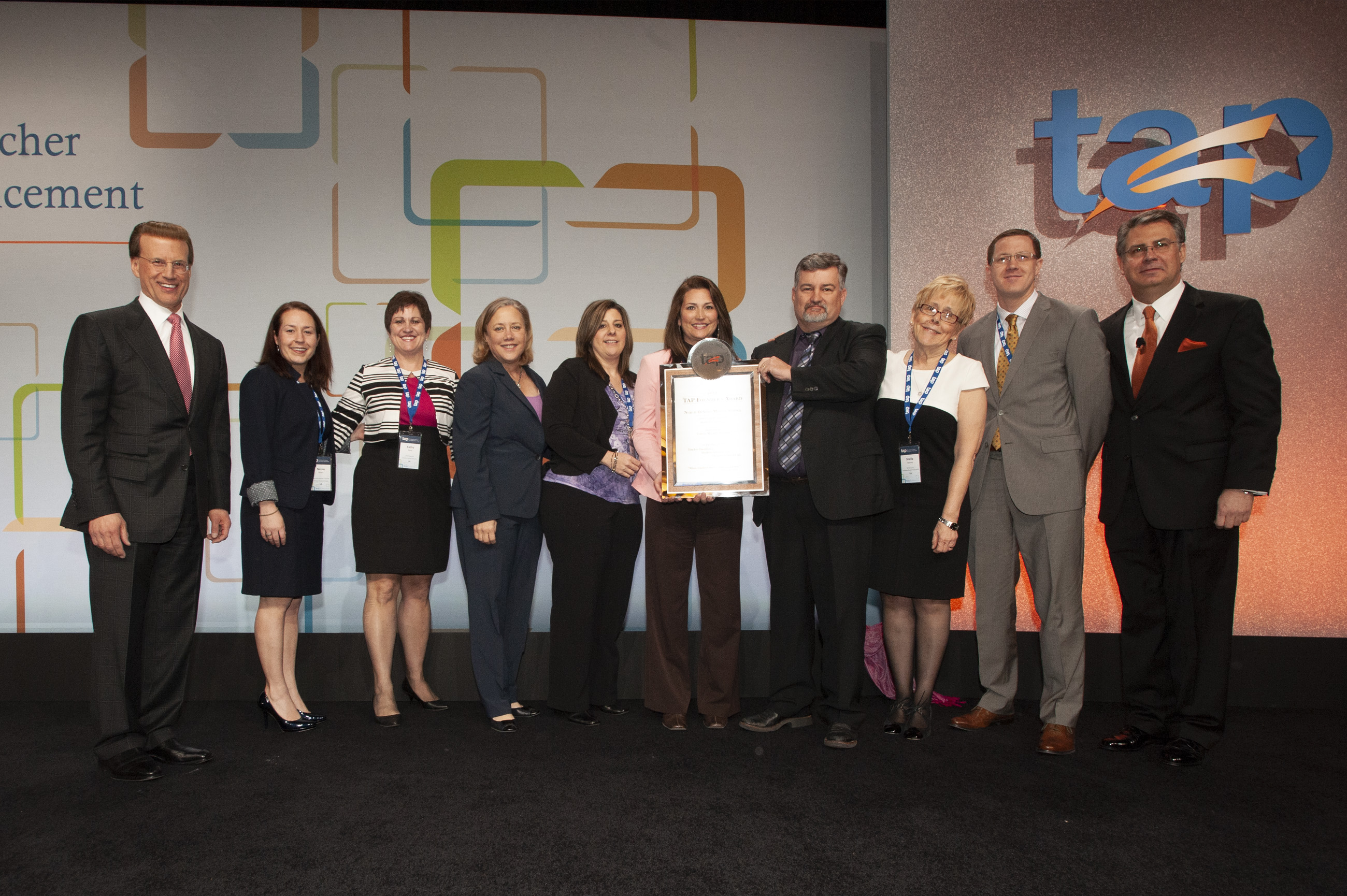 D.C.—Lowell Milken, founder of TAP: The System for Teacher and Student Advancement, today surprised leaders from North DeSoto Middle School in the DeSoto Parish School System, Louisiana, with the prestigious TAP Founder's Award. The award, which includes a $50,000 prize, was presented before more than 1,200 educators and policy leaders during a special luncheon at the 13th National TAP Conference in Washington, D.C.

Funded by the Lowell Milken Family Foundation, the TAP Founder's Award is given annually to one school for distinction in the implementation of TAP's comprehensive system of career advancement, daily job-embedded professional development, rigorous teacher evaluation and accountability, and performance-based compensation. Principal Keith Simmons and other members of the TAP Leadership Team accepted the award on the school's behalf.

"North DeSoto Middle School demonstrates our belief that if you implement the TAP system with fidelity, you will produce meaningful advances in teacher effectiveness and student achievement," said Lowell Milken. "I congratulate Principal Simmons and his talented team of educators on this honor, and wish them continued success in reaching their goals."

Before North DeSoto Middle School started TAP implementation in the 2008-2009 school year, the school received its first "No Growth" label. Eager for a powerful approach to school improvement, Principal Simmons heard about TAP from the district. The school took a vote, and one hundred percent of the faculty voted in favor of implementing the system.

Principal Simmons led the implementation of TAP with strong dedication to the model. In addition to daily coaching, master and mentor teachers facilitate weekly professional development "cluster" meetings tailored to teacher and student needs. The TAP rubrics guide effective teaching practices, and data is used to drive decisions. As another layer of support, instructional strategies are "field-tested" with a sampling of students before the methods are fully implemented.

Cluster meetings are complemented by follow-up, classroom observations and pre- and post-conferences with every teacher. They are also supported by TAP Leadership Team meetings, which occur weekly to oversee TAP implementation schoolwide.

"With TAP, we know there's support," said TAP Mentor Teacher Karen Delgado. "We know that there will be follow-up support in our classrooms during the week. You really can't fail."

"When we first began to realize the results of TAP, it was very encouraging," said Simmons. "This last year was historic growth for us. We are making a difference and that's the way school should be."

This historic growth is evidenced by North DeSoto's strong value-added student achievement scores. The campus has received a 5 value-added score for the past three school years (2009-10, 2010-11, 2011-12), signifying far above average results compared to similar schools in Louisiana.

"Educators at North DeSoto Middle School have done an outstanding job of getting TAP right," said Dr. Cade Brumley, superintendent of the DeSoto Parish School System. "Principal Simmons doesn't accept mediocrity, and that attitude is mirrored in the culture of the school."

The success of the campus motivated the district to implement the TAP system districtwide. In the 2011-12 year, DeSoto Parish was recognized as the most-improved district in the state, increasing its rating from a D to a B.

As TAP Mentor Teacher Christen Foster said, "TAP teaches you that everyone has more potential than you can ever imagine."

The TAP Founder's Award recipients are selected without their knowledge by the National Institute for Excellence in Teaching, which manages and supports TAP. The honor is based on distinction in the following areas: full and proficient implementation of TAP's four elements, achievement according to state or federal measures, and notable recognition as a center and resource of best practices. To be eligible for the TAP Founder's Award, schools must be participating in TAP for at least three years.

The TAP Founder's Award yields benefits that will strengthen the individual school and support its teachers. This is done by means of prominent public recognition and by opportunities to substantively interact on issues of teacher quality and student learning with leaders from government, business and academia.

Photos from the TAP Founder's Award presentation will be available for download at www.niet.org