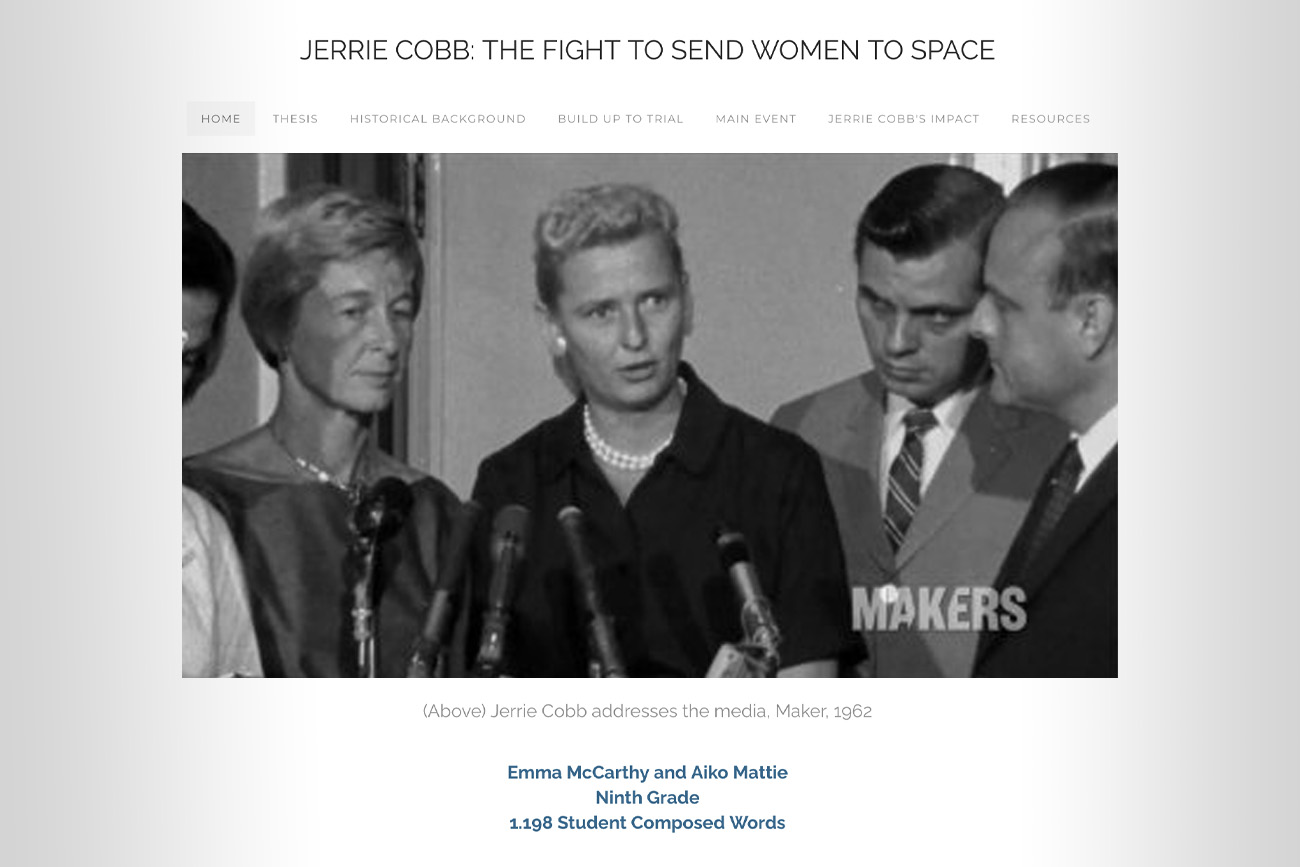 Grand prize goes to St. Paul, Minnesota Students for “The Fight to Send Women to Space”

Aiko and Emma created a website, “Jerrie Cobb: The Fight to Send Women to Space.” In the 1960s, during the early days of manned space flight, Cobb fought for women to be allowed to travel into space alongside the first male astronauts. After NASA stopped the First Lady Astronaut Trainees (FLATs) from completing their testing, Cobb testified before Congress to expose the agency’s discriminatory hiring practices. Her advocacy ultimately led NASA to change its policies and include women in the space program.

The students researched Cobb’s story through books, old newspaper articles, and firsthand accounts of other astronauts of the era. They interviewed Gene Nora Jessen, one of the FLATs, as well as an academic expert who studies women in the space program. Aiko and Emma attend Open World Learning Community (OWL) in St. Paul, Minnesota, a school built around self-directed learning, and were advised by social studies teacher and Lowell Milken Center (LMC) Fellow Katie Craven. Norm Conard, LMC’s executive director, presented Aiko and Emma with the prize at a festive assembly at OWL.

“Aiko and Emma told Jerrie Cobb’s story with great detail and nuance, using sophisticated research skills and multimedia resources,” said Conard. “Each Discovery Award recipient uncovered an Unsung Hero whose contributions deserve to be recognized. We congratulate these wonderful students and their teachers.”

In all, LMC awarded six prizes to middle school and high school students in the U.S. and abroad. In addition to Cobb, the new Unsung Heroes uncovered by the winners’ research include war heroes, scientists and a civil rights advocate.

Megan Christensen and Meredith Kucera won the $2,000 second place prize for “The Incredibly Stupid One,” a documentary about U.S. Navy veteran Douglas Hegdahl, who was captured by the enemy during the Vietnam War. Hegdahl convinced his North Vietnamese captors that he was illiterate and mentally impaired so they would view him as less of a threat. The ruse succeeded, and with his freedom of movement around the camp, Hegdahl was able to collect and commit to memory a vast amount of intelligence that turned out to be critical to the survival of his fellow prisoners. Megan and Meredith attend Washburn Rural Middle School in Topeka, Kansas; LMC Fellows Alice Bertels and Lindsey Dowell advised them as they researched Hegdahl’s life and contributions.
‍

Project: The website “Henrietta Swan Leavitt: The Woman Who Measured the Universe” focuses on Leavitt, an early 20th century female astronomer, whose work allowed scientists to measure vast distances in the universe. Edwin Hubble used her formula as the basis for his work that showed the universe is constantly expanding.

Project: “Sir Nicholas Winton: 6,000 Descendants and One Man,” a documentary, tells the story of Winton, who saved 669 children from the Nazis during World War II in Czechoslovakia. More than 6,000 people are alive now thanks to Winton’s courageous actions.

Project: The documentary, “Maurice Willows: Unsung Hero of the 1920 Tulsa Race Riot,” traces the actions of Willows, who advocated to change the policies of the Red Cross so the organization could help African Americans in the wake of dangerous riots in Tulsa.

Project: “The Making of the Story of Karl Ernst von Baer,” an animated documentary, explores the work of Estonian embryologist von Baer, who discovered the mammalian egg and shed important light on the way embryos develop.

LMC’s Discovery Award provides U.S. and international students in grades 4 through 12 a unique opportunity to use their creative talents to develop projects that feature Unsung Heroes from history who demonstrate one person’s power to make positive change in the world. Projects can take the form of documentary/multimedia, performance, or website. Projects require robust research, an annotated bibliography and a process paper. The Unsung Heroes’ stories must show potential for life beyond the development of the project and an ability to inspire students and others to take sustainable actions that carry out the legacies of their subjects.

Established in 2007, the Lowell Milken Center (LMC) for Unsung Heroes discovers, develops and communicates the stories of Unsung Heroes who have made a profound and positive difference in the course of history. Now in its eleventh year, LMC has reached over 1,000,000 students and 9,000 schools in all 50 states, with growing global reach. Learn more about LMC and the Discovery Award at www.LowellMilkenCenter.org. Connect with us on Facebook and Twitter.