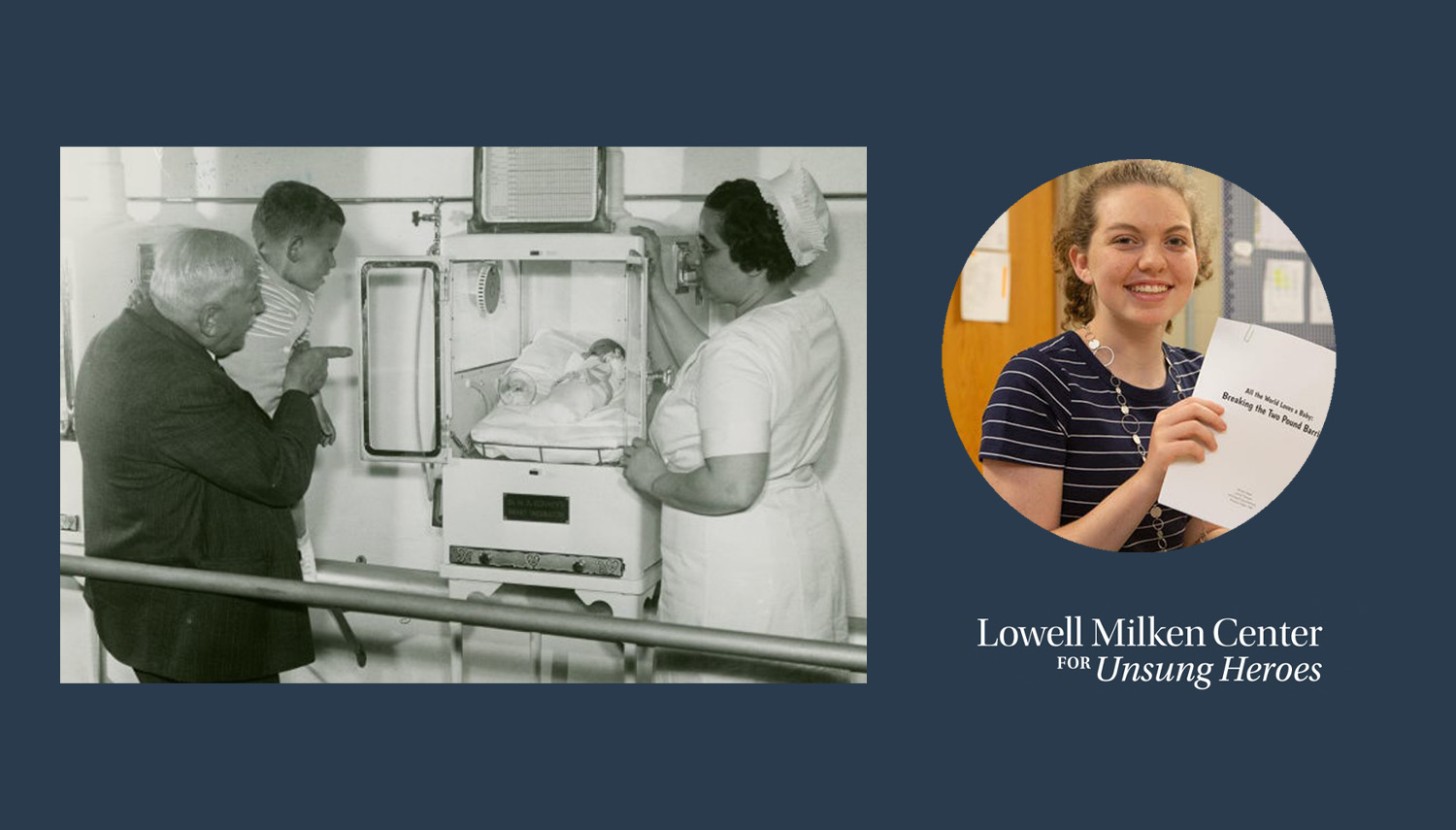 FORT SCOTT, KS, (September 15, 2020) – Washburn Rural Middle School student Allison Reed just learned via Zoom that she is the $6,000 Grand Prize winner of the Lowell Milken Center for Unsung Heroes’ annual Discovery Award competition. Through research and a compelling documentary, Reed’s entry “All the World Loves a Baby” explores the actions of Martin Couney, who in 1920 determined to save premature babies, assumed by the medical establishment to be a lost cause. By placing the tiny infants in incubators displayed in carnival sideshows to fund the effort, Couney saved thousands of lives. Hospitals eventually followed suit.

According to Norm Conard, executive director of the Lowell Milken Center (LMC), “All the World Loves a Baby is an exceptional project in every way. Allison Reed has assembled a documentary which shows a brilliant quality of work. The story of Martin Couney is unique, unsung and inspirational. We look forward to expanding this story in an exhibit for our Hall of Unsung Heroes.” Conard also congratulated Reed’s teachers Lindsey Dowell and Alice Bertels.

From its base in Fort Scott, Kansas, LMC has awarded elementary, middle and high school students $13,000 in cash prizes in its 2019-20 Discovery Award competition. The international competition is designed to inspire students by prompting them to conduct primary and secondary research projects on unsung heroes from history whose accomplishments remain largely unknown to the public.

The $2,000 Second Place award has gone to Elaine Jiao, Dayoung Lee, and Zara Qizilbash from Jericho High School in Jericho, New York. The students combed through court case literature, utilized book research, conducted interviews and created a documentary to tell the story of unsung hero Ann Hopkins in their entry Ann Hopkins: Breaking the Glass Ceiling in Employment. Hopkins was denied partnership at the accounting firm Price Waterhouse for not dressing or acting feminine enough. In 1982, she sued and her case made it to the Supreme Court, where it was settled in her favor establishing a precedent for discrimination in the workplace. [Teacher Valerie Conklin.]

The $2,000 Outstanding Middle School Project award has gone to Jericho Middle School student Kaitlyn Choi in Jericho, NY. Conducting research and interviews, Choi developed a website to tell the story of unsung hero James Reese Europe: The Jazz Lieutenant. Europe not only was the first African American officer to lead troops in World War I, he was also a composer, conductor and organizer who created a labor union and contracting agency for African American entertainers. Leading a wartime brass band in France, he introduced jazz to the European continent. [Teacher Konstantine Kovoros.]

The $13,000 in cash prizes can be used in any way students see fit. Due to COVID-19, students were notified about their winnings via video call.

LMC’s Discovery Award provides U.S. and international students in grades 4 through 12 a unique opportunity to use their artistic talents to develop projects that showcase the power one person has to make positive change in the world. Projects can take the form of documentary/multimedia, performance or website and require robust research, an annotated bibliography and a process paper. The unsung heroes’ stories must show potential for life beyond the development of the project, and an ability to inspire students and others to take sustainable actions that carry out the legacies of their subjects.

Submissions for the next competition season will open mid-2021.

Established in 2007, the Lowell Milken Center for Unsung Heroes (LMC) discovers, develops and communicates the stories of unsung heroes who have made a profound and positive impact on history, yet are largely unrecognized by contemporary generations. LMC has reached over 2,000,000 students and 11,000 schools in all 50 states and countries around the world. Learn more about LMC and the Discovery Award. Connect with us on Facebook, Twitter, Instagram and YouTube.