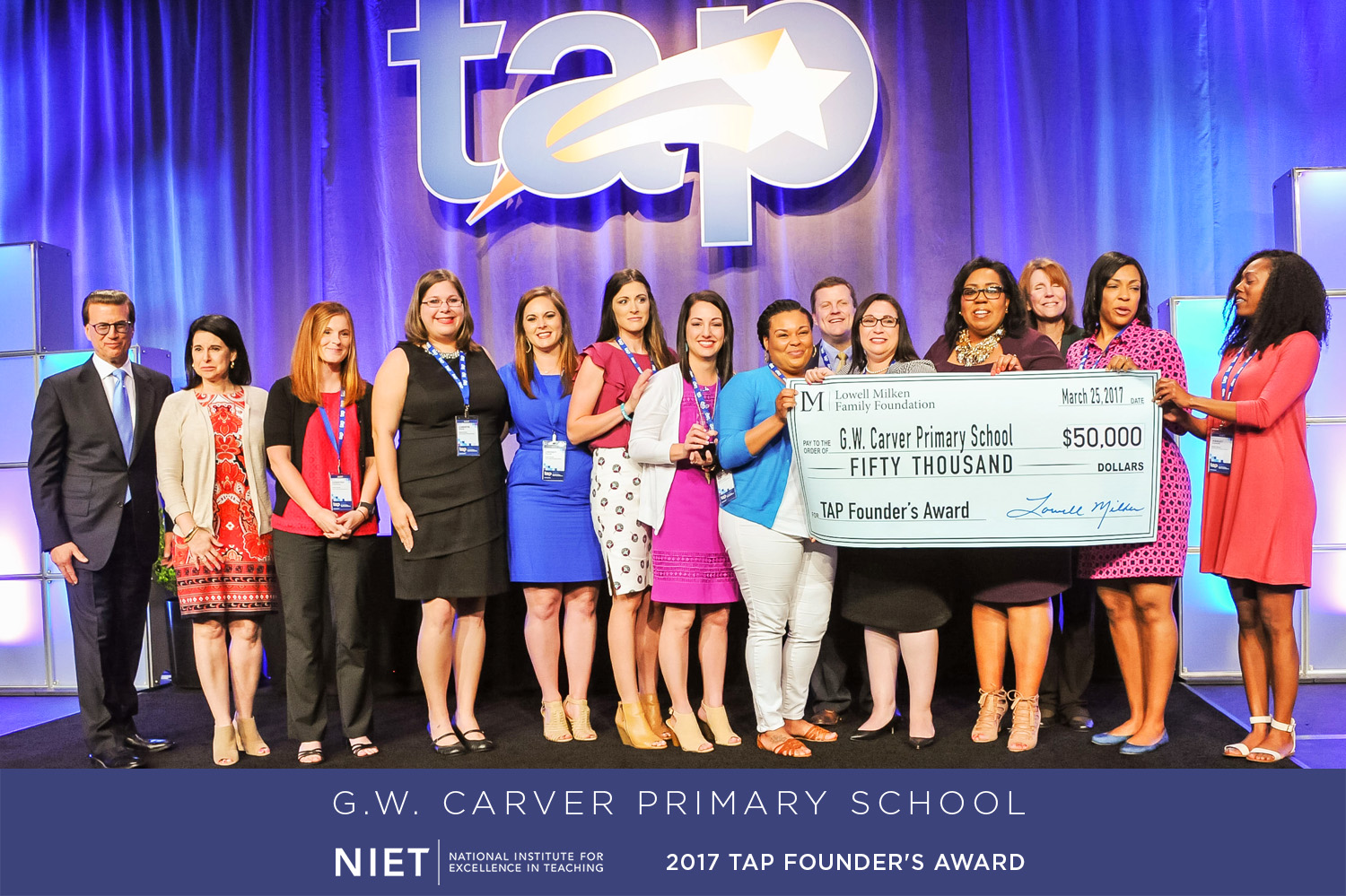 New Orleans, Louisiana—Lowell Milken, chairman of the National Institute for Excellence in Teaching (NIET) and founder of TAP: The System for Teacher and Student Advancement, announced that G.W. Carver Primary School in Ascension Public Schools, Louisiana, is the 2017 recipient of the TAP Founder's Award. NIET's highest honor, the award is presented annually to one school for exceptional efforts to implement and represent the principles of the TAP System for Teacher and Student Advancement—resulting in improvements in student achievement, among other goals. It comes with a $50,000 cash prize.

Lowell Milken surprised G.W. Carver Primary School faculty with the recognition during a keynote luncheon at the 2017 National TAP Conference in New Orleans, Louisiana, before more than 1,000 educators, policymakers, researchers and other influential leaders. Principal Latatia Johnson accepted the award on the school's behalf.

Through TAP, Carver has been able to attract and retain effective teachers as well as train them to critically analyze data and pinpoint areas of need. As a result, the school has raised its letter grade and is exceeding student growth targets.

"I am pleased to congratulate Principal Johnson, her faculty and the entire Carver student body on this well-deserved honor," said Lowell Milken. "Through their commitment to excellence, perseverance and hard work, they are turning big ideas of positive change into realities—outstanding teachers, measured student achievement growth, and proud students and parents."
‍

According to Principal Johnson, growing and promoting talent from within has had a "huge positive cultural effect" on teacher retention; in 2015-16, the school had a 91% retention rate and staff anticipates that the rate will increase.

With a strong and stable team in place, Johnson and her staff were ready to tackle educational challenges, including a growing English Language Learner population and an 89% rate of students eligible for free and reduced-price lunch. The school TAP leadership team embraced the "we go first" philosophy: members guide the weekly professional development meetings, model strategies and field-test them with groups of students. They collaborate with faculty on assessing what works, what doesn’t and how to improve. Then the faculty as a whole has the credibility of the leadership team to pursue strategies and take risks. The students, in turn, want to be a part of the action.

The success of their approach is reflected in their effort to close the reading gap. Early in TAP implementation, Carver educators learned from data that all third, fourth and fifth graders were reading below grade level. Staff members identified essential standards, created criteria for what mastery looked and sounded like for each standard, developed rigorous assessments that met them, and field-tested strategies to make sure that they had a successful game plan. Mentor teachers implemented the process with masters’ support, analyzing student work along the way.

These methods, coupled by teaching in new state-of-the-art facility, helped Carver increase its third-grade English Language Arts Academic Index. In the upper grades, proficiency soared from 0 to 75%-and-above in two years' time. As a result of these improvements, Carver's School Performance Score grew more than seven points, moving its letter grade up from a C- to a B+. The school also received a level 3 value-added growth score on a 1-4 scale, signifying that it exceeded growth targets when compared to similar schools across the state.

"TAP is a driving force behind our continued mission to ensure every child is successful in an ever-changing world," said Johnson. "Our teachers are empowered, our students are empowered; we're changing lives."

TAP Founder's Award recipients are selected without their knowledge by NIET, which manages and supports the TAP System. The honor is based on distinction in the following areas: proficient implementation of TAP's four core elements, student academic growth according to state or federal measures, and notable recognition as a center and resource of best practices.

The prize is funded by the Lowell Milken Family Foundation and it is to be used toward efforts to improve instruction and academic achievement.

The honor yields benefits that will strengthen the individual school and support its teachers. This is done by means of prominent public recognition and by opportunities to substantively interact on issues of educator effectiveness and student learning with leaders from government, business and academia.