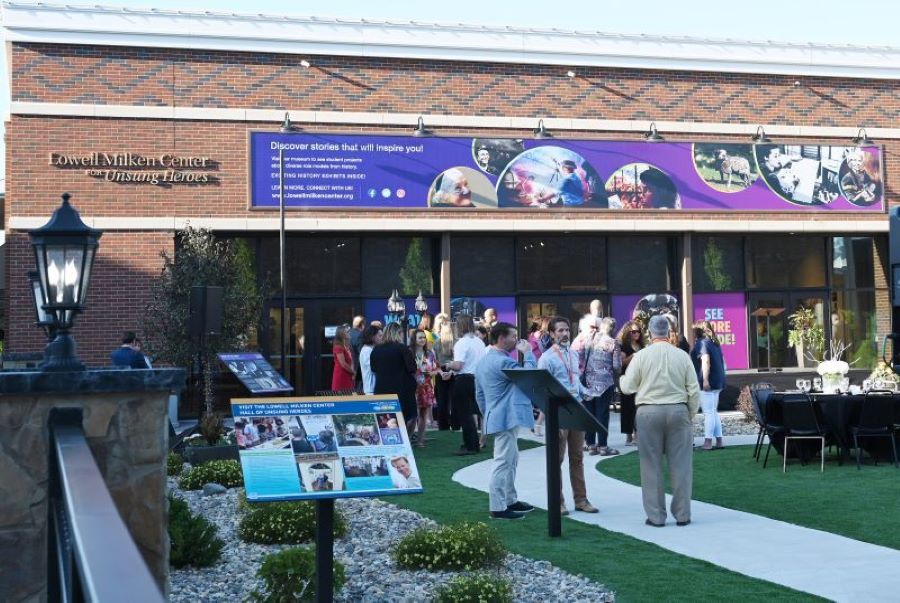 FORT SCOTT, Kansas, (September 12, 2022) - The official Grand Opening—including VIP speeches, a surprise award presentation, and a formal ribbon-cutting ceremony—welcomed 200 guests to a new park and outdoor exhibit space in the heart of the historic downtown district of Fort Scott, KS. The event was a fitting accompaniment to the 1 Anniversary celebration of the Lowell Milken Center for Unsung Heroes (LMC).

The festivities began at 10 a.m. on September 12 with a special ceremony recognizing honored guests who traveled from across the country to attend. This included 24 teachers who had earned the distinction of being LMC Fellows, several living Unsung Heroes and their family members, longtime patrons of LMC and the many individuals who have played key roles in the support and development of the park. Special appreciation was given for the park’s major donor, the Lowell Milken Family Foundation, and for generous grants from the Sunderland Foundation and Timken Foundation. “As we enter this new era, the Lowell Milken Center for Unsung Heroes continues to stand as a testament to the power of Unsung Heroes to change the world through project-based learning,” said LMC Chief Executive Officer Norm Conard.

In construction since June of last year, the LMC park is now a vibrant and much-anticipated expansion of LMC. The park features outdoor Unsung Hero exhibits with interactive story rails, a walking trail, an enhanced water feature, and beautiful landscaping with bench seating for guests to enjoy. The park provides a community space where visitors to the museum and Fort Scott residents alike can enjoy the tranquil scenery, learn about the Unsung Heroes profiled in the story rails, and gather for community programs and activities in partnership with other business in the downtown area.

Highlights of the Grand Opening event included reflections from LMC Founder Lowell Milken. “I believe that a center for Unsung Heroes could only have been borne out of a community that deeply values history, excellence and education,” he said. “Fifteen years later we can all take pride in knowing that educators, communities and students experience the powerful combination that can occur when history merged with project-based learning leads to the discovery of change-makers.”

Also speaking during the event were Chief Executive Officer Norm Conard and Program Director Megan Felt, who have been instrumental in LMC since its earliest beginnings. Remarks were also made by longtime supporters of LMC, such as Former Executive Director of the National Teachers’ Hall of Fame Carol Strickland, LMC Park Committee Chair Beth Nuss and Fort Scott Chamber of Commerce Director Lindsay Madison. A surprise announcement capped off the special occasion when attendee Gracie Conrad, a high school student from Taylor, Nebraska, learned that she was the $6,000 Grand Prize recipient in the 2022 Discovery Award competition for her powerful documentary about Holocaust Unsung Hero Betty Goudsmit-Oudkerk. Conrad’s documentary explores the courage and tenacity required for Goudsmit-Oudkerk to leverage her position as a daycare nurse in the Netherlands to help save more than 600 children from the Nazis.

Following a ribbon-cutting ceremony, guests were invited inside LMC’s Hall of Unsung Heroes museum to partake in its exhibits, enjoy light refreshments and view several presentations by educators who have participated in the LMC fellowship program. Guests also had the unique opportunity during these presentations to meet the living Unsung Heroes or their immediate families who were in attendance, such as Carl Wilkens, an Unsung Hero of the Rwandan genocide; family members of Unsung Hero Chester Nez, one of WWII’s “First Twenty-Nine” Navajo Code Talkers; the family of Unsung Hero Andrew Jackson Higgins, who invented the Higgins boats used in amphibious landings in WWII and was credited by President Eisenhower as the “man who won the war”; and the family of Unsung Hero Gene Shoemaker, a pioneer in astrogeology and the only person whose ashes are buried on the moon.

The 15th Anniversary celebration will culminate in a Community Open House hosted by LMC on Tuesday, September 13, between 10 a.m. - 4 p.m., welcoming everyone to this exciting new addition to LMC and the greater Fort Scott community. LMC is located at 1 South Main, Fort Scott, Kansas 66701.

Established in 2007, the Lowell Milken Center for Unsung Heroes (LMC) discovers, develops and communicates the stories of unsung heroes who have made a profound and positive impact on history, yet are largely unrecognized by contemporary generations. LMC has reached over 3,000,000 students and 30,000 schools in all 50 states and countries around the world. Learn more about the LMC and the Discovery Award. Connect with us on Facebook, Twitter, Instagram and YouTube.