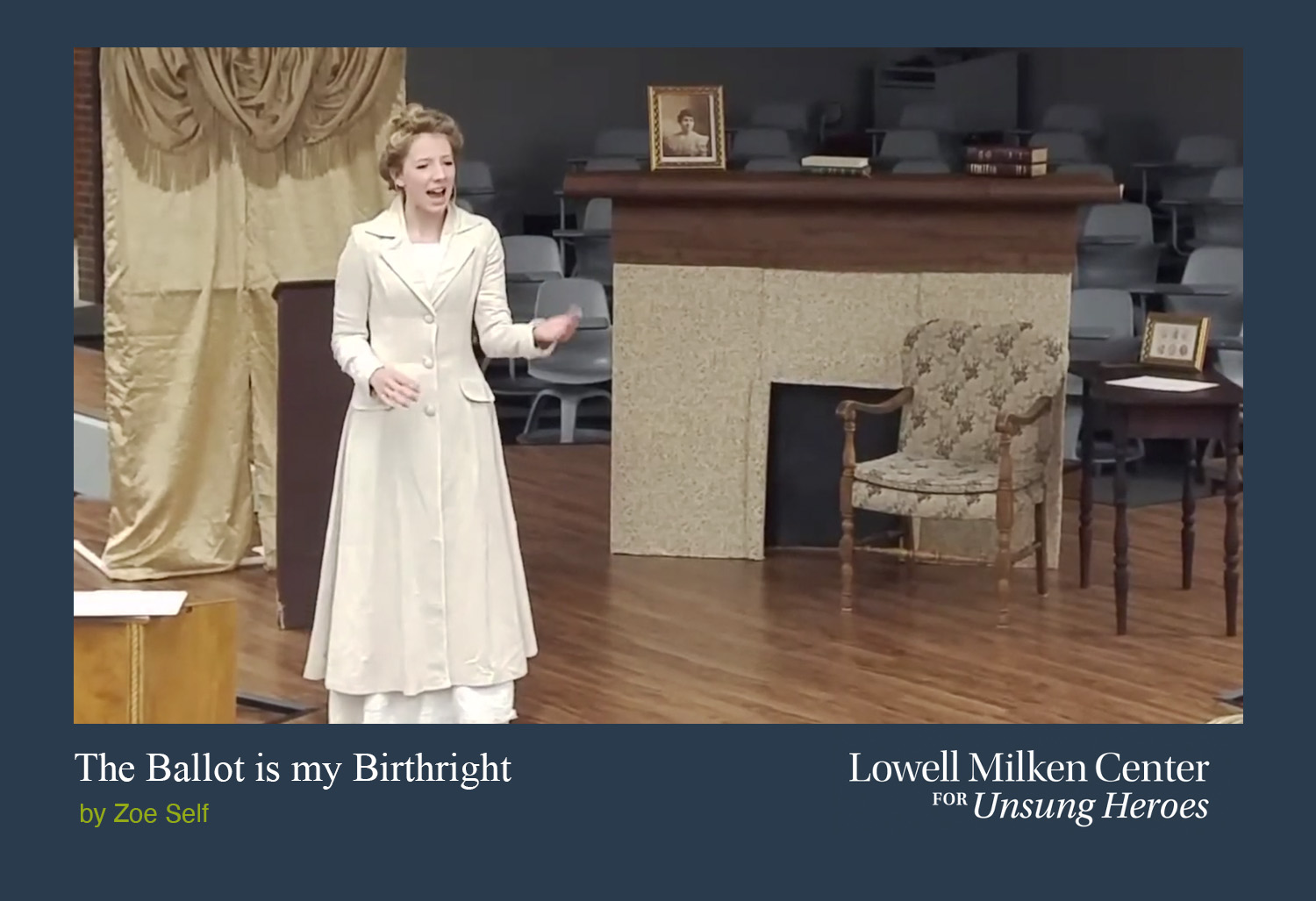 Zoe wrote an original play depicting the story of Lilla Day Monroe, a Topeka-based suffragette who devoted her life to advocating for women’s rights. In addition to serving as the president of the Kansas State Suffrage Association, Monroe worked as a journalist, establishing and editing The Club Woman and The Kansas Woman’s Journal. In her play, Zoe urges the audience to “do something; be something” and take a stand. She also incorporates song and poetry into her project.

“The quality of our Discovery Award projects continues to increase,” says LMC Executive Director Norm Conard. “Zoe, as with our other winners, demonstrated great research skills and the discovery of an unsung hero/role model for all ages. Each recipient displayed a climate of learning and critical thinking. We congratulate these wonderful young people and their teachers.”

The $2,000 second place prize has been awarded to Cleopatra Singleton of C.E. Byrd High School in Louisiana. Cleopatra’s compelling documentary tells the story of Pauli Murray, an American civil rights and women’s rights activist. Cleopatra’s project brings to light an extraordinary legacy of courage and conviction through Murray’s lifetime commitment to justice and her profound influence on some of the most famous leaders of her time, including Thurgood Marshall and Eleanor Roosevelt. In addition to publishing important civil rights essays that continue to resonate, Murray practiced law and in 1977, became the first African American woman to become an Episcopal priest.

Additional winners in this international student competition discovered Unsung Heroes whose actions positively changed the course of history and improved the lives of others. They include:

Students: Benjamin Koelkebeck & Levi Stokesbary
Teacher: Ivan Obert
School: South Middle School, Missouri
Project: The documentary, “Varian Fry: Taking a Stand Against the Nazis to Save Thousands of Intellectuals,” tells the story of Vivian Fry, an American journalist who ran a rescue network in Vichy France to help thousands of anti-Nazi and Jewish refugees to escape Nazi-occupied territories, including many of the most prominent intellectuals of the 20th century like Marc Chagall and Marcel Duchamp.

Students: Sam Haynes & Logan Pippin
Teacher: Susan Sittenauer
School: Seaman High School, Kansas
Project: The documentary, “Witold Pilecki: A Hero of the Holocaust that took a Stand Against the Nazi Regime,” tells the story of Witold Pilecki, a brave Polish cavalryman and intelligence officer who snuck into Auschwitz to report to the outside world about the horrors taking place in the camp.

LMC’s Discovery Award provides U.S. and international students in grades 4 through 12 a unique opportunity to use their creative talents to develop projects that feature Unsung Heroes from history who demonstrate the power that one person has to make positive change in the world. Projects can take the form of documentary/multimedia, performance, or website. In addition to robust research, an annotated bibliography and a process paper, projects must show potential for life beyond the development of the project and an ability to inspire students and others to take sustainable actions that carry out the legacies of their subjects.

Established in 2007, the Lowell Milken Center (LMC) for Unsung Heroes discovers, develops and communicates the stories of Unsung Heroes who have made a profound and positive difference in the course of history. Now in its eighth year, LMC has reached over 1,000,000 students and 9,000 schools in all 50 states, with growing global reach. Learn more about LMC and the Discovery Award at www.LowellMilkenCenter.org. Connect with us on Facebook and Twitter.