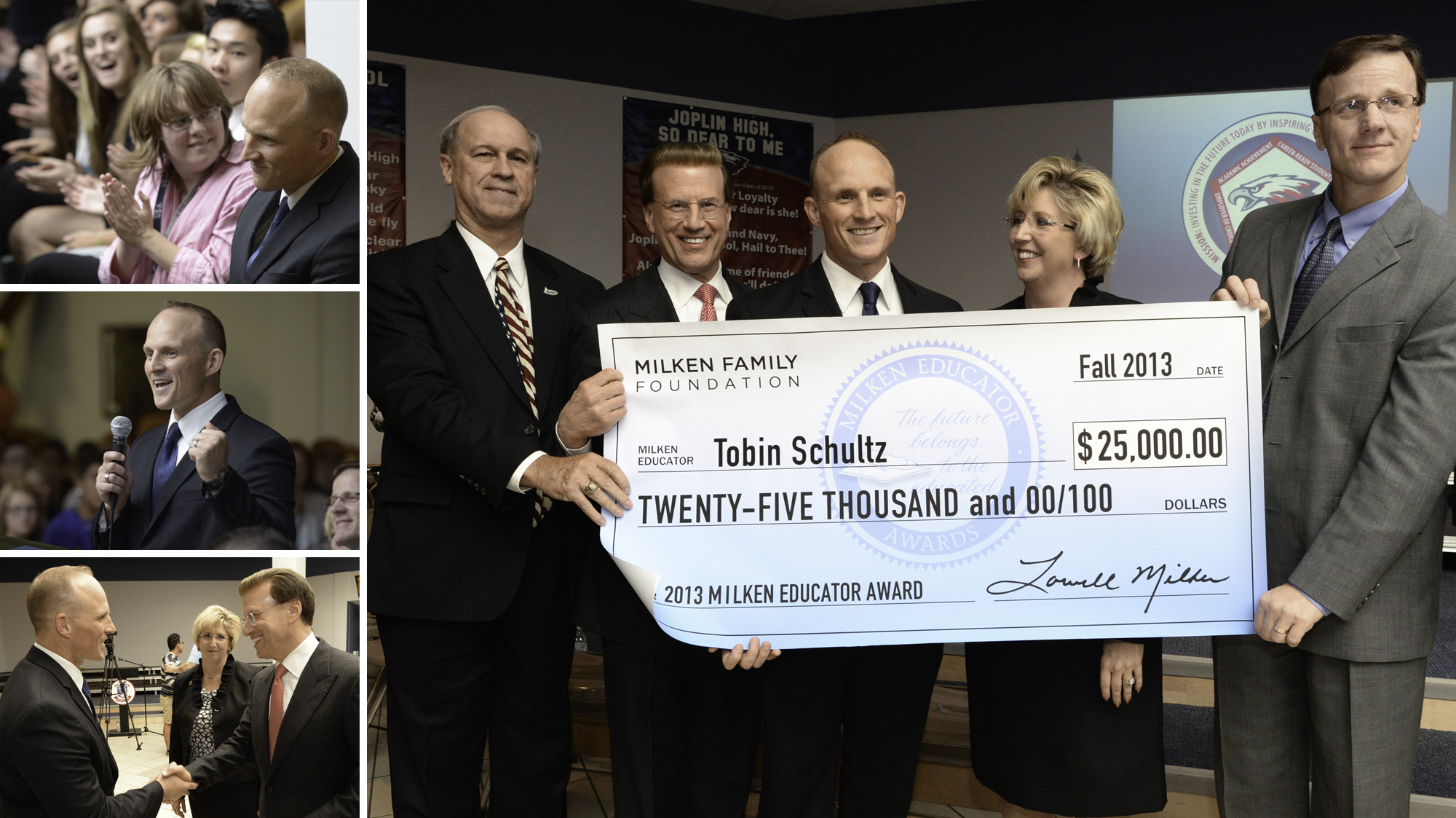 Today’s afternoon school assembly was anything but ordinary when Milken Family Foundation Chairman and Co-Founder Lowell Milken announced that Tobin Schultz, a social studies teacher and football coach at Joplin High School, was the 2013 Missouri Milken Educator Award, www.MilkenEducatorAwards.org, recipient. One of education’s most prestigious recognitions, the Award comes with a no-strings-attached cash prize of $25,000.

Video of this award is available at:KOAMTV.com

With 450 students filling the cafeteria, and more than 1,300 watching via streaming video, aswell as colleagues, dignitaries, and a host of media, Tobin Schultz experienced the fanfare typically reserved for all-star athletes and award-winning entertainers. On hand to offer their congratulations were Missouri Deputy Commissioner of Elementary and Secondary Education Dr. Ron Lankford and Joplin School District Assistant Superintendent and 1996 Milken Educator Award recipient Dr. Angela Besendorfer. Today’s Award, one of up to 40 to be given in 2013, will be the only one presented in Missouri.

“Our public education system is at the heart of America’s promise and essential to safeguarding the American dream for future generations,” said Lowell Milken, chairman and co-founder of the Milken Family Foundation. “With research confirming that effective teachers represent the single most important school-related factor in raising student achievement, it is important to honor them, learn from them, and inspire more capable people to enter the profession. As the program’s motto extols, the future belongs to the educated.”

ABOUT THE AWARD RECIPIENT:

Social studies teacher and former department chair, football coach, key developer of a freshman transition program and loving adoptive father, Joplin High's Tobin Schultz is a compassionate, unifying force and role model in Joplin, Mo., a town devastated by a deadly tornado two years ago. As coordinator of the school's Link Crew, Schultz helps students — temporarily separated in buildings in different parts of town — connect with one another and establish partnerships in the community. In so doing, they gain the confidence to become leaders. The recently launched program, in which juniors and seniors mentor freshmen, has no budget, so with Schultz's guidance the mentors raise money for activities such as tailgate parties, service projects, self-esteem workshops and hot-cocoa-and-cram sessions before finals. In the 2012-13 schoolyear, the Joplin community contributed more than $13,000 and about $50,000 in goods and services to Link Crew. The program is making a difference: Compared with the previous school year, freshman attendance rose by 50%. There were 1,000 fewer disciplinary referrals of freshmen to the principal's office. They earned A's and B's at a higher rate, and F's declined by 42%.

In the classroom, Schultz, who has taught for 11 years, is viewed as challenging and fair. He demonstrates caring, warmth and respect for individual students while holding them to high expectations. Seniors often choose Schultz to lead them into the graduation ceremony. Though quiet and reserved, he finds a way to reach all his students — from those at risk to the most highly motivated— inspiring them to strive for excellence. Schultz's American Government End-of-Course Exam results have helped the school post some of the highest scores in Missouri. His students' "advanced and proficient" rate is at 70%.

Colleagues seek and value Schultz's input, and he has mentored many new teachers. Among his numerous contributions to Joplin High and the district, he has served as the school's steering committee co-chair and Future Educators of America and cadet teaching supervisor, and he led an analysis of improvement strategies for the social studies department. He regularly gives presentations to the Joplin community about Link Crew. Such is his dedication to the town that after the tornado, when he had a chance to take a coaching job elsewhere, Schultz chose to stay. Setting another caring example, Schultz and his wife are parents to two adopted children, one from a war-torn region and the other with special needs.