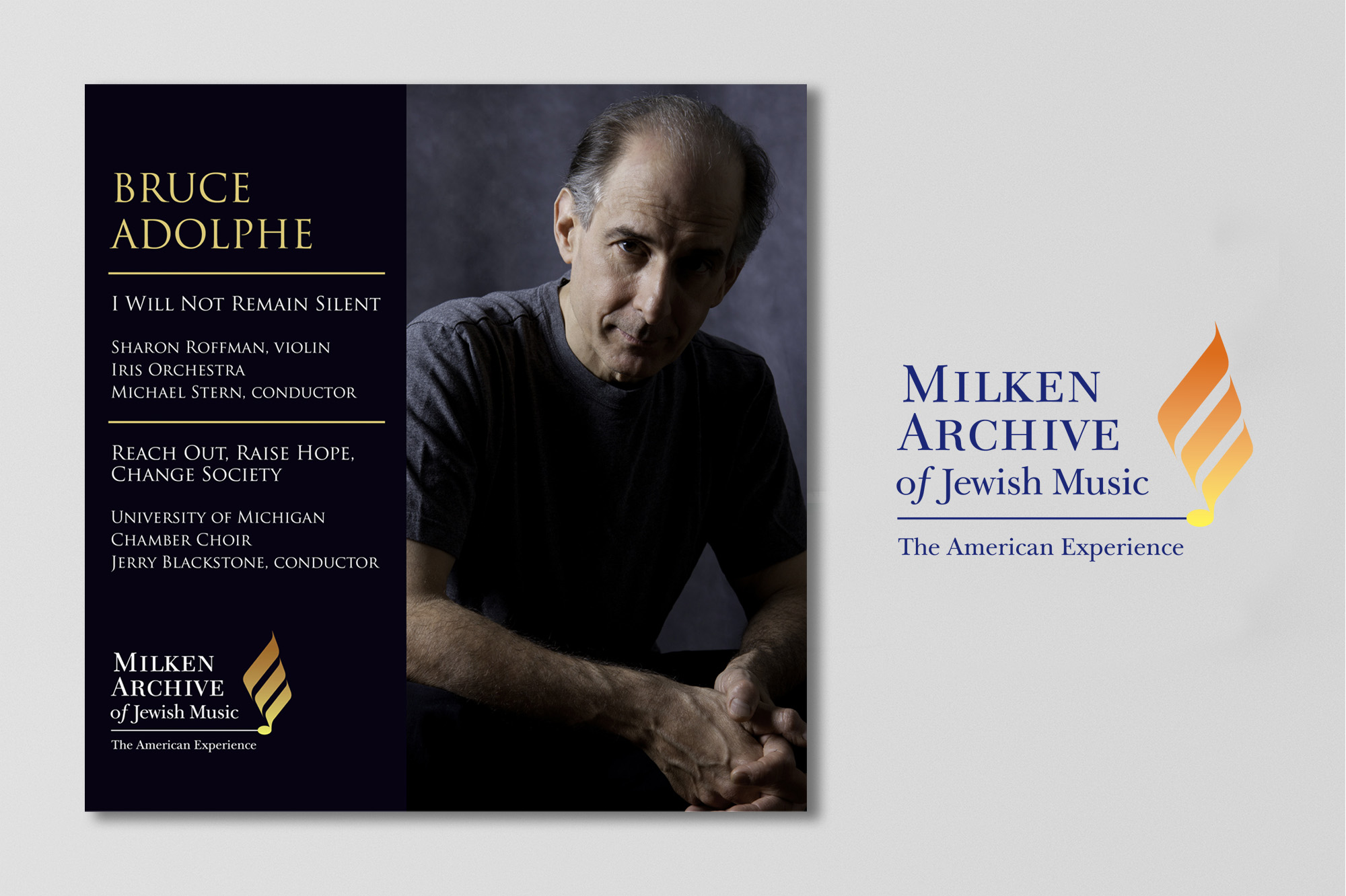 With themes central to our times, the Milken Archive of Jewish Music: The American Experience is releasing its first new album since 2015 with I Will Not Remain Silent, by prominent American composer Bruce Adolphe. Featuring two compositions, the album explores themes of social justice through the prism of 20th-century activist Rabbi Joachim Prinz.

“The Milken Archive release of I Will Not Remain Silent and Reach Out, Raise Hope, Change Society brings together two very different works about violence, injustice, human rights, and hope at a moment when there is an urgent need once again for this message to be powerfully sounded in America,” said Adolphe. “I appreciate that the Milken Archive recognizes the significance of these works and the importance of Prinz’s message.”

Born in 1902, Prinz spoke out against the rise of anti-Semitism as a rabbi in Germany in the 1920s and 30s and became a prominent voice of the American Civil Rights Movement. Though not as well-known today, Prinz's public profile was such that he preceded Dr. Martin Luther King, Jr. at the 1963 March on Washington, where King gave his famous “I Have a Dream” speech. Prinz used this highly visible, national platform to stress the importance of speaking out against hatred and bigotry, and to emphasize the dangers of silence.

“When I was the rabbi of the Jewish community in Berlin under the Hitler regime, I learned many things,” Prinz told the crowd assembled that day in 1963. “The most important thing that I learned under those tragic circumstances was that bigotry and hatred are not the most urgent problem. The most urgent, the most disgraceful, the most shameful and the most tragic problem is silence.”

In focusing on silence as the most important problem of the American Civil Rights Movement, Prinz emphasized the responsibility that those not affected by racism and inequality have in creating a more just and equal society. “A great people which had created a great civilization had become a nation of silent onlookers,” Prinz said in reference to Germany under the

When Adolphe was commissioned in 2010 to write a work for the University of Michigan’s School of Social Work for its 90th anniversary, he made Prinz’s words a central part of a ten- movement cantata titled after the School of Social Work’s motto: Reach Out, Raise Hope, Change Society. The cantata’s second movement is a setting of the line from Prinz’s 1963 speech, “The most urgent, the most disgraceful, the most shameful and the most tragic problem is silence.” Also included in the cantata are social justice-themed texts by other mostly American sources, including Chief Joseph, Carolivia Herron, and June Jordan. The recording features renowned choral conductor Jerry Blackstone with the University of Michigan Chamber Choir and a small chamber ensemble.

In 2011, when violinist Sharon Roffman approached Adolphe about composing a violin concerto, his mind turned immediately back to Prinz and he suggested a piece based on his life. Roffman agreed and was able to engage Michael Stern and Iris Orchestra to commit their support. In 2014, Adolphe began work on I Will Not Remain Silent, a 22-minute, two-movement violin concerto that depicts the broad arc of Prinz’s life from Europe to America. The violin—an instrument Adolphe sees as “profoundly tied to Jewish musical identity”—represents Prinz as an orator and prophet, the voice that refuses to remain silent in the face of violence and opposition.

In the first movement, “Berlin During the Nazi Era,” a potent and foreboding orchestra represents the powerful, oppressive National Socialist regime. In the second movement, titled “America During the Civil Rights Movement,” the orchestra represents the forces of both good and evil: the violin soars over quotations from “Oh, Freedom” and “We Shall Overcome,” but struggles as it confronts angry masses opposed to the Civil Rights Movement. The recording features Roffman as violin soloist, with Michael Stern conducting Iris Orchestra in the 2015 premiere performance.

“Bruce Adolphe is one of the most creative voices working in music today and Joachim Prinz’s story is one that deserves to be more widely known,” said Milken Archive curator Jeff Janeczko. “Events of the past year have shown the harsh inequalities that continue to exist more than 150 years after the 13th Amendment made slavery illegal and more than 50 years since the brave activists of the Civil Rights Movement achieved hard-won legal protections regarding racial discrimination. One of the most brilliant things about these two works is that they treat Prinz as a historical actor rather than a hero or savior. And yet, through Prinz we see how powerful it can be to simply speak—to refuse to remain to silent.”

The Milken Archive album, I Will Not Remain Silent, will be released on Friday, February 5th and will be available for streaming on Spotify, Apple Music, Amazon, and all other major digital service providers. For more information, contact info@milkenarchive.org.
‍

Founded by philanthropist Lowell Milken in 1990, the Milken Archive has engaged an international roster of artists, composers and experts of different faiths and disciplines to share sacred and secular music pertaining to the Jewish experience in America, much of which was undiscovered or in danger of being lost. Engaging an equally global audience, the Milken Archive has completed more than 600 recordings, 200 oral histories and a series of 50 award- winning albums on the Naxos American Classics label.