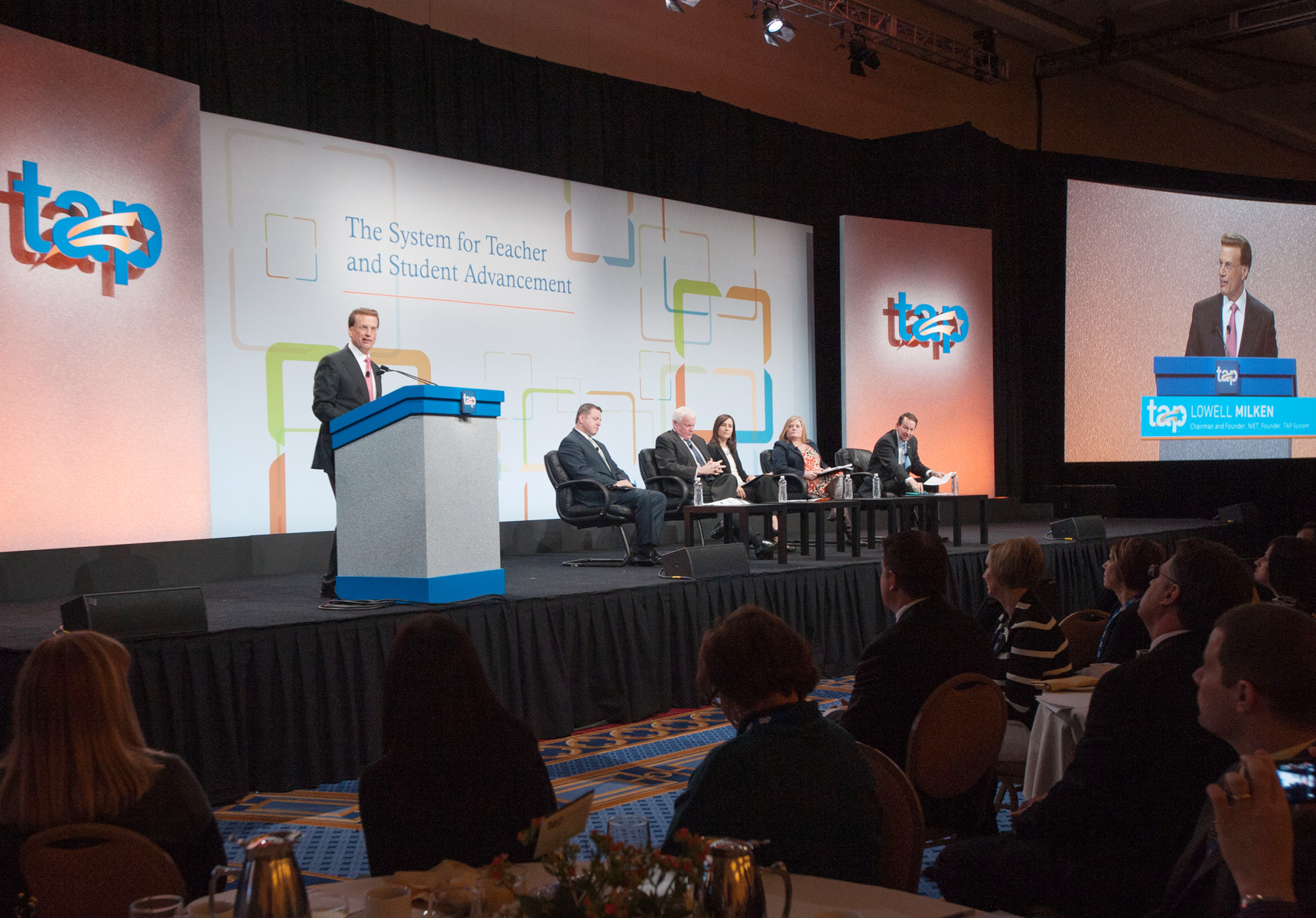 Through the generous support of the Lowell Milken Family Foundation, $100,000 in award recognitions were proivded to schools and school districts across the country at the 13th National TAP Conference in Washington, D.C.  The awards were presented before an audience of over 1,200 educators and policy leaders attending the Conference.

Six outstanding schools were presented with the TAP Ambassador Award—which comes with a financial prize of $5,000. The award honors a TAP school that has gone beyond its campus to represent the principles of the TAP system and assist others in the state, region and nation. The award was presented before over 1,200 educators and policy leaders attending a special Saturday luncheon at the 13th National TAP Conference in Washington, D.C.

The Ambassador Awardees have made exceptional gains in student achievement and teacher effectiveness in a wide away of areas. At Lincoln High School, the number of students scoring proficient and advanced in literacy has increased from 43 percent in 2007 to 80 percent in 2012—and the graduation rate for all students has risen to 96 percent since adopting the TAP system. In just one year, Southport Elementary School utilized TAP to make solid student achievement growth, by building on the school's focus of improving learning for all students by tailoring weekly professional development "cluster" meetings to specific needs; creating leadership roles to mentor others through TAP mentor and master teacher positions; implementing TAP's teacher support and evaluation with rigor; and instituting a competitive compensation system to reward educators for increased skill and student performance. At Queen Palmer Elemtnary school implementation of TAP has served as a model in the district, propelling school leaders to serve on TAP national panels and lead trainings. Prior to implemeting TAP, Battery Creek High—a Title I school—was labeled as the lowest-performing high school in the district, and has since earned the highest value-added score of 5 after exit exam passage rates increased by more than 12 percent, end-of-course passage rates have been raised by 10 percent, and graduation rates are seven percent higher after just one school year. Value-added student growth scores at awardee Donaldsonville High School have steadily increased from a 3 (a solid year's growth) in 2009-10, to a 4 (more than a year's growth) in 2010-2011, and to a 5 (significantly more than a year's growth) in 2011-2012—the highest score possible. These efforts are reflected in a jump in state ratings from a D to a B for the 2011-2012 school year.

Leaders of Ascension Parish Schools, Louisiana,  and Knox County schools in Tennessee were surprised with the TAP Award of Distinction, which honors an organization for its dedication and commitment to TAP: The System for Teacher and Student Advancement. The Award comes with a financial prize of $10,000. Ascension Parish's efforts to create strong teaching and learning conditions were recognized by The Education Trust in the 2012 report, Building and Sustaining Teacher Talent. The report highlights five districts across the U.S. that have transformed schools into places of learning growth where top teachers are eager to teach, and more importantly, stay and thrive. Knox County Schools initially began TAP implementation in 2006 with three schools. It added a fourth the following year, all supported by local funds and the Great Schools Partnership. Motivated by the schools' success, the district partnered with NIET on a federal Teacher Incentive Fund grant in 2010 to expand TAP to 14 additional schools. According to 2011-12 data, 14 of the district's schools exceeded growth targets and eleven of the new schools achieved the highest value-added score of 5 after their first year of implementation.

Lowell Milken, founder of TAP: The System for Teacher and Student Advancement, surprised leaders from North DeSoto Middle School in the DeSoto Parish School System, Louisiana, with the prestigious TAP Founder's Award. The award, which includes a $50,000 prize. The TAP Founder's Award is given annually to one school for distinction in the implementation of TAP's comprehensive system of career advancement, daily job-embedded professional development, rigorous teacher evaluation and accountability, and performance-based compensation. Principal Keith Simmons and other members of the TAP Leadership Team accepted the award on the school's behalf. "North DeSoto Middle School demonstrates our belief that if you implement the TAP system with fidelity, you will produce meaningful advances in teacher effectiveness and student achievement," said Lowell Milken. "I congratulate Principal Simmons and his talented team of educators on this honor, and wish them continued success in reaching their goals."

The school's historic growth is evidenced by North DeSoto's strong value-added student achievement scores. The campus has received a 5 value-added score for the past three school years (2009-10, 2010-11, 2011-12), signifying far above average results compared to similar schools in Louisiana. "When we first began to realize the results of TAP, it was very encouraging," said Principal Simmons. "This last year was historic growth for us. We are making a difference and that's the way school should be."

Initiatives of the National Institute for Excellence in Teaching are improving the educational experience for more than 100,000 teachers and one million students. For more information on TAP or the 13th National TAP Conference in Washington, D.C., visit http://www.niet.org.